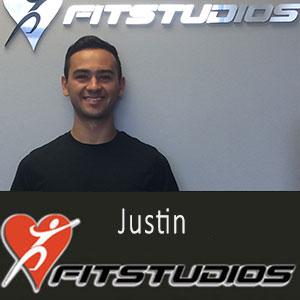 Justin has fond memories of growing up outdoors and playing multiple sports. Through high school Justin played hockey but was never skilled enough to progress into rep hockey. After high school, Justin moved on to study Fitness and Health Promotion at Centennial College and also got his shot to play a higher level hockey with the Centennial Colts, playing alongside players who had dropped out of levels as high as Jr. A. While studying at Centennial College, Justin gained a mass amount of knowledge about the human body, functional movement, and what it takes to make it in the fitness industry. Justin graduated Centennial in 2015 at the top of his class and then went on to study across the Atlantic, in England for a year in a program specialized in upgrading to a Bachelor’s degree. Throughout this program, he learned a variety of Olympic lifting techniques and the importance of injury prevention.

Justin sees each and every one of his clients as an opportunity to build essential movement skills and athleticism that they can take with them through their life’s journey. Justin enjoys building client’s strength, developing strong and healthy posture, and creating whole-body power.

Justin’s certifications include being a Registered Health and Exercise Practitioner through the Ontario Fitness Council (OFC-RHEP Gold) and a Sport Performance Coach (Level 1) through Twist Sport Conditioning.